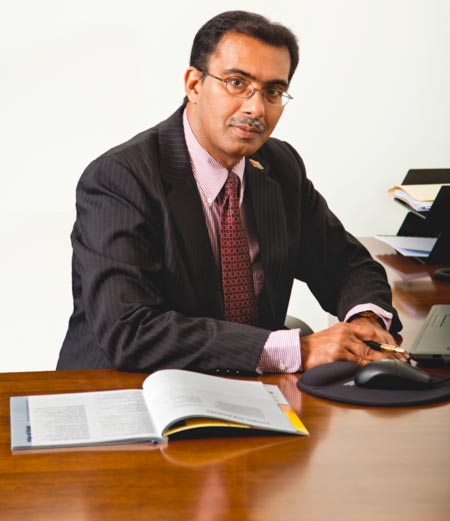 Varun Maharaj, who joined TTIFC in February this year following a career in the banking and finance sector, explains to The Report Company how Trinidad and Tobago’s strategic location, increasingly well-educated labour pool, governmental commitment to the sector and relatively low business costs are transforming the nation into the Caribbean’s financial services hub.

The Report Company: What are Trinidad and Tobago’s advantages as an international financial centre?

Varun Maharaj: Trinidad & Tobago is widely accepted as the financial capital of the Caribbean. It has been a source of financing for all the islands in the Caribbean – be it corporates (within) or governments. The development of Trinidad and Tobago as an international financial centre providing premier services is a natural extension of our experiences in the Caribbean. Our advantages are low energy costs, a well-educated labour force, our near-shore location and our geographical location below the hurricane belt. Another compelling advantage is our competitive telecoms infrastructure which is on par with developed nations. All of this amounts to a lower operating risk.

TRC: What role does the financial services sector play in Trinidad and Tobago’s economic diversification?

VM: The financial services sector has grown quickly and consistently, maintaining a growth rate of between 3 and 4 percent and contributing 13 percent to GDP – the 2nd largest contributor to GDP after the energy sector which is 40% of GDP. It is the right sector to focus one’s attention and the Trinidad and Tobago IFC is an initiative that can propel this change and by extension, the entire evolution of the economic landscape of Trinidad and Tobago.

TRC: What initiatives are you implementing?

VM: We are pursuing two major initiatives – Financial Institution Support Services (FINeSS) and Capital Market development. FINeSS is targeting the creation of a Business Process Outsourcing industry with specific focus on middle and back office processing.

The other targeted initiative is that of capital market development, whereby the TTIFC will position Trinidad & Tobago internationally as the best place to issue debt. We are presently laying the foundation and expect that within the next year we will see continued progress in the domestic market as we work in parallel to establish conditions that will bring confidence and attract international players.

In the process of executing these two initiatives we will generate knowledge worker jobs for our 620,000 plus labour force.

“Trinidad & Tobago is widely accepted as the financial capital of the Caribbean. It has been a source of financing for all the islands in the Caribbean – be it corporates (within) or governments.”

TRC: What is the scope of FINeSS?

VM: FINeSS focuses on lowering entities operating costs by creating a centre of excellence for banking, finance, insurance and accounting that is near-shore to the head office of the entity.

We are promoting Trinidad & Tobago as the preferred location to establish your middle and back office processing sites. We understand that we are late to the game and as such we have extensive governmental support borne out in the tax incentive programmes articulated in the Trinidad and Tobago Free Zones Act.

TRC: What reforms are necessary to boost the financial sector?

VM: The Government has been aggressive in assuring compliance with international bodies and standards. In December 2011 we would have enacted the laws in respect of the Financial Intelligence Unit removing us from the FATF grey list. In addition, in December 2012 Trinidad and Tobago enacted the revision of the Securities and Exchange Act which led to its acceptance by IOSCO.

TRC: What can be done to make Trinidad and Tobago a more attractive destination?

VM: We believe that we have a grand value proposition. We have worked to articulate and fine tune the many differentiators such as location, stable economy, North American cultural affinity, well-trained labour pool, low energy costs. We are responsive to needs articulated by providers as evidenced by the rapidity within which, in less than a year, we were able to amend certain disincentives articulated in the T&T Free Zones Act.

TRC: How are these free zones designated?

VM: There is an application process through which the Trinidad and Tobago IFC together with the Free Zones Company will support, guide and assist an applicant in the financial services sector. Services are to be provided primarily to off shore clients but some accommodation and negotiation can be provided to applicants who wish to perform some on-shore work.

TRC: What developments have taken place since this legislation was passed at the beginning of the year?

VM: ScotiaBank Canada has invested US$15 million in plant and machinery and created 300 to 400 jobs in the new FINeSS industry. The Trinidad and Tobago IFC would have supported ScotiaBank by ensuring legislative changes that support the industry were enacted in a timely manner.

We also signed an agreement with Pan-American Life Insurance Company and they are in the process of initiating a feasibility study as to how best to set up their middle and back office processing.

“The development of Trinidad and Tobago as an international financial centre providing premier services is a natural extension of our experiences in the Caribbean.”

TRC: What kind of services can you provide to financial services providers?

VM: The TTIFC is committed to understanding and assisting in fulfilling the needs of interested investors from initial enquiries to establishment of operations. We will make the entire process as streamlined and efficient as possible by offering proactive and customised guidance and support. The country also has an investor facilitation company – InvesTT which also provides support to acquire all necessary licenses and approvals.

TRC: What are the main areas that you have identified to attract investment?

VM: In the first instance we are looking at the near-shore regions: the United States, Canada and further north in the Caribbean. Secondly, we are looking to the providers of middle and back office processing, the companies that have the best global reputation and most of them are largely located in India. Our future plans include Europe.

TRC: What challenges have you had to deal with so far?

VM: The challenge is really overcoming the perception that Trinidad & Tobago is only an oil and gas economy.

TRC: Would you say there is appropriate human capital in Trinidad and Tobago for the financial services sector?

VM: The evidence says ‘yes’. Primary, Secondary, Tertiary and professional education in Trinidad and Tobago is provided free of charge to the citizens of T&T by the Government. As such, we produce 7000 well educated individuals annually, providing great stock of human capital for the proposed FINeSS industry. The immense growth of all locally based financial institutions in the region is due to the high-value, well-trained human capital available which has allowed for scalability and flexibility and international dynamics.

TRC: How does Trinidad and Tobago differentiate itself from other centres in the region?

VM: Trinidad & Tobago is where the region locates its capital markets; it is the home-base for all the major financial players in the region.

TRC: To what extent could Trinidad and Tobago improve further?

VM: We are working on improving our Competiveness and have achieved key improvements in business processes such as business registration, which now takes a much shorter time to accomplish.

TRC: How would you assess the relationship between TTIFC and stakeholders such as the Ministry of Finance and the Economy?

VM: We have many stakeholders both government and private sector and in order to achieve this mammoth task we have engaged at all levels. In this way we ensure advice, support and contribution from all relevant and affected parties. It has worked very well for us.

TRC: What is your future outlook for the international financial services sector and for TTIFC?

“The government has been aggressive in assuring compliance with international bodies and standards.”