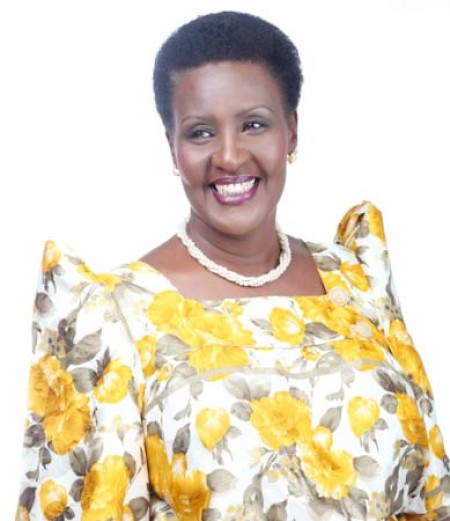 Amelia Kyambadde joined the civil service in 1979, and rose to the rank of principal private secretary to the president before resigning in 2010 to contest a seat in parliament, becoming the first woman to represent her constituency. She was then appointed minister for trade, industry and cooperatives in 2011. She spoke to The Report Company about the challenges she faces in overcoming Uganda’s trade deficit and transforming the country’s productive sector.

The Report Company: What are the main priorities for your ministry?

Amelia Anne Kyambadde: In this ministry, I have worked on the basis of the national trade policy. We have managed to achieve a lot of things through the policy, for example the regulatory framework. We have put in place laws that help to regulate trade and we have managed to achieve a number of laws that support local industry. People were complaining about an influx of cheaper, foreign products, but now with this policy we give preference to local content.

Regional integration is another strong policy that has promoted trade in this country. The East African Community has a population of about 140 million people, and it is a market for the businesses that are starting here in Uganda. We felt that that wasn’t enough, so we have broadened to COMESA, which is a market of about 600 million. That has helped boost trade in services and trade in commodities.

“Regional integration is a strong policy that has promoted trade in this country.”

AAK: We have to protect our own producers, and we do this through excise duty. This is to prevent dumping. Our business community prefer to deal with the local products, and it also pushes our local producers to improve on their quality to make their products competitive. We have the Uganda National Bureau of Standards, which can impose punitive measures on manufacturers who do not meet standards. We are working very hard on this.

TRC: What is being done to address Uganda’s trade deficit?

AAK: This is one of the biggest challenges we have. In order to balance the trade deficit, we are trying to improve on industrialization by promoting cooperatives. There is no way you can have quality and quantity if you do not work as a group. By forming cooperatives, our producers can buy machinery for processing, they can be sensitized about quality, they can produce in bulk, and they can produce the quantities needed.

Storage is another area, because you can produce as much as possible, but if you don’t have a warehouse for storage you can’t take the goods to market, so we are constructing warehouses. We have partnered with the private sector and we are establishing a commodity exchange. The private sector is constructing warehouses throughout the country and we have established an authority that will license them, check on their standards, check on their quality and check on the management of these warehouses so that we can work towards industrialization and reduce our trade deficit. Once you have bulk, once you have quality, then you are able to export. It is a struggle, but we will get there.

TRC: Uganda has not benefited as much as expected from the African Growth and Opportunity Act (AGOA). What can the country do to take better advantage of this opportunity?

AAK: Uganda is working on AGOA but AGOA has had its challenges. Normally when you have such programs, the countries with which you have these partnerships come in and tell you what they want. This did not happen with AGOA. Our trade partners usually tell us the quality they require, and they educate and sensitize people on how to achieve that, but AGOA has not done that very well. We haven’t had enough information on what their market prefers.

I also believe that we need to address the over-liberalization of our economy. We need to create parameters because the economy is too scattered. That is why we are now promoting public-private partnerships.

“There is no way we can operate alone as Uganda with our small population. We need a broader market. We need partnerships.”

TRC: What are you doing to promote partnerships of this kind?

AAK: One example is a food processing plant that we have set up. It’s a public-private partnership, which means that the government will have a little more control for programs such as AGOA.

TRC: What impact has the current crisis in South Sudan had on Uganda’s exporters, and what alternatives do you see?

AAK: It’s most unfortunate about South Sudan because our economy had grown so quickly because of the trade that was going on between our countries. This has reduced a lot now, and it is such a blow. The war is not going to end tomorrow and even though there is trade, it is at a very low ebb. So the alternative is to promote other markets now, such as the COMESA-EAC-SADC Tripartite, so by pushing trade in that direction we will be able to fill the gap left by South Sudan. And AGOA can also help us there.

TRC: What are the challenges you face in your role as minister?

AAK: The challenge I find most working in this office is bureaucracy. I was the president’s chief of staff before and things moved faster because the response is faster in the president’s office, so you see results. The challenge you find in the ministry is that an issue that could be handled in a few days takes a long time. However, the fact that I have that background means I can push things to move faster.

The mentorship I received from working with the president has enabled me to have a successful tenure in this post. We pride ourselves on being the best performing ministry in this country, as per a recent survey. That mentorship I got has helped me to shape up this ministry which I found to be a bit slow at the beginning, but now it is one of the fastest.

Another challenge is that now I have to take my own decisions. Before, it is your boss taking decisions and you just communicate them, but now I have a challenge for me as a person to ensure that I make logical, pragmatic decisions, so I have to be very careful. It helps to be decisive in whatever you do. I’ve seen my colleagues, who consult and consult, but I have worked with the president and I know what he wants. That has been an advantage for me.

TRC: What is your vision for this ministry?

AAK: First of all I would like to promote public-private partnerships. We have the Uganda Development Corporation, which is the financial arm of government. We would like to see a lot of projects being incubated through that program and supported by that program and I know that we will create a middle class for this country from there. Instead of just having foreign companies coming in, we can build a middle class of Ugandans.

Secondly, I would like to ensure that our warehouse receipt system is successful because I know that this is the core and the key to industrialization. Once you have quantity, once you have quality, your factories will grow, your industries will grow and then you can reduce the trade deficit.

Another aim is to strengthen regional integration. There is no way we can operate alone as Uganda with our small population. We need a broader market. We need partnerships. I would like to see that happen, and my aim is that, by the time I leave this ministry, at least we would have achieved these goals.

TRC: What would you like people to know about Uganda?

AAK: The media in the past has been very hostile to developing countries like those in Africa. Uganda is a beautiful country. It has a lot of prospects in minerals, in oil, in agriculture and, most of all, in its people. We want to see more people coming to invest in Uganda so that we can grow.