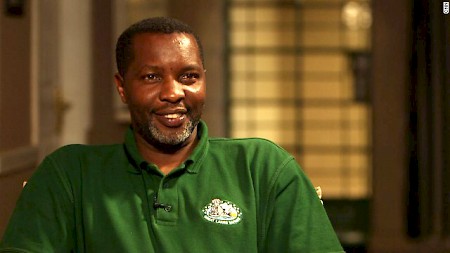 Ugandan tour company Great Lakes Safaris Limited was founded in 2001 by local entrepreneur Amos Wekesa with the intention of improving the quality of tour operations in Uganda and the Great Lakes region of Africa. Today, 14 years later, it has become one of East Africa’s leading tour companies. The Report Company met with Amos Wekesa to find out more.

The Report Company: What led to you setting up the company?

Amos Wekesa Masaba: I came from a very extremely impoverished home. I did not go to school until the age of ten when I was taken up by the Salvation Army, who paid my school fees. I didn’t even like school, so I didn’t go to university. It’s been a long walk. I came from being a sweeper earning $10 a month in 1997, then my second job was as an office messenger, earning $15. Then I became a tour guide, earning a dollar a day. In 2001 I set up this company and the rest is history.

When we started out it was extremely difficult, but I’d been a tour guide so a lot of people had written online about their experience with me. What made us grow as a business was in 2002, when I took out a lady from the World Bank on a tour. She then recommended another group, and one of that group enjoyed their trip so much, and he decided to come back. Then on November 22nd 2002 he wrote a big article in the Washington Times about us, and included our contacts, and that was the beginning of our business. People came looking for us, and that opened lots of opportunities. From then I’ve appeared on CNN; we’ve been everywhere.

TRC: What areas is the company involved in today?

AWM: The first business was operating safaris, then the second business was Uganda lodges in national parks. I have 50 percent shares in a solar business and quite a bit of a property portfolio in the city. I have branched out over the years, but only into areas that didn’t take up my time so I could focus on tourism. I am passionate about tourism. Many people talk about agriculture, but I don’t think agriculture has the same potential as tourism because we have peasants involved in agriculture and they can’t take this country forward.

I think that services, specifically tourism, can get people off the land and at the same time leave the land for better commercial farming.

“Uganda is an incredible country. There’s so much, but we’re doing so little with it”

TRC: What does it take to be a successful tourism company in Uganda?

AWM: I think it’s simply commitment. It’s providing what you say you will provide. You can’t use political influence to grow your business in tourism. You have to use your word. If I say I’m going to pick you up at 7 o’clock on Saturday, I cannot arrive at 9 o’clock. If I say you are going to a five-star hotel but take you to a one-star hotel, it doesn’t work. You have to stick to your word. This has worked very well for us and we have grown into a very familiar and trustworthy company over the years because of that.

TRC: What needs to be communicated to potential tourists about Uganda?

AWM: Uganda is an incredible country. There’s so much, but we’re doing so little with it. We have the best weather in the world. We have 1,056 different species of birds, 11 percent of the world’s species of birds. Egypt is known for the Nile, but the source of the Nile is here. We have a unique culture. We have some of the largest mountains in the continent. We are the world capital for primates. We have more gorillas than Rwanda, although Rwanda is better known for them. In life, it doesn’t matter what you have. It matters what you do with it.

TRC: How would you appraise the ease of doing business in Uganda for the tourism sector?

AWM: There is support from the government, but you have to empower people in business. If I market Uganda I attract other opportunities. Tourism alone can help every other sector grow because investors are not going to invest in a country which they haven’t seen.

Uganda’s tourism sector is growing at 20 percent per year irrespective of the interest by the government in marketing the sector. But Uganda urgently needs resources. It urgently needs money and we must use that urgency to invest in areas that can bring in foreign money to the country and tourism is number one. We need to market Uganda to bring in the money. Why do we need go and borrow billions of dollars if we can instead bring in millions of tourists each spending a thousand dollars?

TRC: How does Uganda compare to other tourism destinations in the region?

AWM: In terms of biodiversity, no country competes with us in the region. And Uganda’s offerings are very unique. We have more inland waterways than any country in the continent and this is an advantage because if you go to the Masai Mara, or Serengeti, you have a game drive in the morning, and a game drive in the afternoon. If you come here, you can do a walk, a boat trip and a game drive. You can have a cruise on the Nile then chimpanzee trekking, all in one national park. The diversity is amazing. No-one can beat us. This is something we need to take advantage of as a country.

TRC: What would be your message to potential visitors?

AWM: Uganda is the place to be.