After centuries of being under siege, politically and often literally, Gibraltar is showing a new confidence in its particular status as part of the European Union and as a burgeoning powerhouse in the global economy.

There is a swagger about 21st-century Gibraltar. After 300 years of resisting Spanish assaults on its integrity and successfully breaking out from the paternal wing of British colonialism, the Rock today is a bustling hive of forward-looking economic activity and political debate over how the future should be shaped.

After the threat posed by the Spanish blockade of the Franco era, membership of the European Union has provided a basis for a more confident expression of Gibraltar’s demands. Gibraltarians’ united voice in wishing to drive their own destiny was made heard in no uncertain terms in the 2002 referendum, in which almost 99 percent of voters rejected the concept of Anglo-Spanish joint sovereignty over the Rock, as put forward by the British government of the time.

The 2004 establishment of a trilateral forum of dialogue, in which Gibraltar participated on equal terms with the UK and Spain, underlined the idea that there was a new reality afoot: the Rock was no longer anyone’s possession to be shared or bargained over in any way, but rather a political reality whose interests had to be taken into account for the good of all historical parties. Real progress was made during the forum period, with deals over the payment of pensions to Spanish workers affected by the 1969 border closure and the aim of making traffic across the frontier  flow with greater ease, as well as ending all air restrictions.

The withdrawal of Spain from trilateral relations after the 2011 electoral victory of Mariano Rajoy’s conservative People’s party brought these discussions to an end. But the return to a more hostile, obstructive approach from Madrid, which has reverted to its use of border security as a diplomatic weapon,  is no longer the problem it once was, as Gibraltar takes a more pragmatic view of cross-border relations.

After Madrid pointedly ramped up security checks at the border in 2013, the European Commission told Spain its actions were “disproportionate and politically motivated”, while not going so far as to say they were illegal.

Gibraltar’s authorities today believe that such hostility on the part of its neighbour is a futile venture, depriving Spain of the very real benefits of greater engagement. According to Chief Minister Fabian Picardo, “Gibraltar is much more than the Rock and an unpleasant headline on a summer’s day.” Speaking in Madrid earlier this year, Picardo refuted Spanish claims that Gibraltar operates outside international tax laws and urged the Rajoy government to seek greater cooperation with the territory.

“Gibraltar provides a quarter of the economy of the Campo de Gibraltar area,” he said. “These are not the figures of an enemy”.

The undeniable cloud on today’s horizon for Gibraltar is the danger of a British exit from the EU, if UK voters (including Gibraltarians) decide to abandon the EU in a referendum due within the next two years. The Rock will always have cultural ties to Britain, but economically it is now part of the wider world. To continue to thrive, it wants to remain there. Gibraltar, Picardo said, “is part of Europe; we want more Europe”. 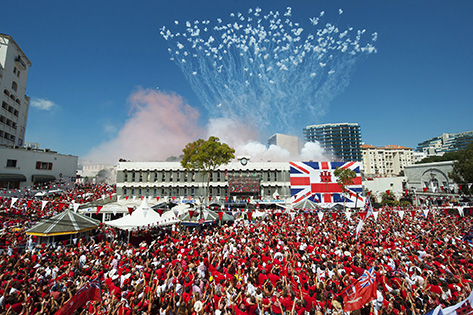 Gibraltar’s reformed constitution of 2006 sought to establish a more mature relationship with its former colonial master, while also underlining the role of the territory’s elected parliament at the heart of democratic decision making for the Rock’s inhabitants.

The governor’s powers were reduced and the two remaining unelected members of the Gibraltar parliament were removed, increasing the number of elected members to 17.

The government is elected for a term of four years, with the current chief minister, Fabian Picardo, having won office in 2011 shortly after replacing the long-serving Joe Bossano as leader of the Gibraltar Socialist Labour Party. Bossano was chief minister between 1988 and 1996, when Peter Caruana of the Gibraltar Social Democrats (GSD), began his 15-year stint at the head of government.

Despite Gibraltarians’ unanimity on the sovereignty issue, politics on the Rock can be uncompromisingly robust. In July, parliamentary speaker Adolfo Canepa criticised members for virulent exchanges that fell “just short of insults” after an acrimonious budget debate saw current GSD leader square up to Chief Minister Picardo over issues including gas supplies, fishing with nets and the planned Europa Point stadium.