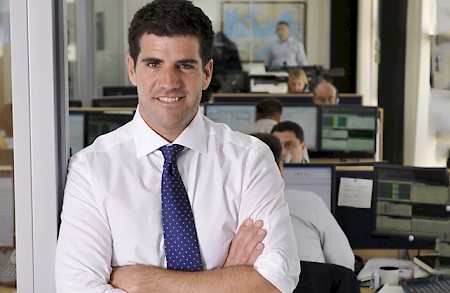 Set up in 1996 after local businessman John A. Bassadone identified an opportunity to commercialise the physical supply of bunkers in the port of Gibraltar, Peninsula Petroleum now spans the globe, with 18 offices located in the world’s major shipping and bunkering hubs. The Report Company caught up with its managing director to learn more about this family-run company’s approach to doing business.

In Association with
Gibunco Group

The Report Company: Why was Peninsula set up?

John Bassadone: Peninsula was set up in 1996. Bunkering was one of the key activities at the time, but the market here in Gibraltar was only about 250,000 tonnes with the only supplier being Shell. The big market in the region was Ceuta, and the logistics were very poor. Cepsa Gibraltar Ltd, which is a 50:50 owned company between Cepsa and our parent company Gibunco was undertaking activities on the operations side of things and the commercial side of things was done in Madrid by the partner in that venture. As Cepsa Gibraltar expanded, it brought more hardware. One of our key strengths was the refinery, which is only a mile away.

TRC: Was it pre-ordained that you join your father’s business after leaving school?

JB: Not really. I started work for a few months with a relatively small Italian bunker with an office in London, as a trainee trader there. I loved it. That was my thing, trading, and after that training period I had offers from other broking companies in London and the opportunity came up to commercialise our own oil and my father called me and asked if I wanted to take it on. I felt comfortable about it, so I set up Peninsula Petroleum in February 1996 and it was fantastic.

It was a great challenge and something different because it was commercial. The whole business was about trying to commercialise this product. It started small, there was a $50,000 investment in the company, but in year one, we actually sold more than 75,000 tonnes.

Back then, the business was quite underdeveloped, compared to today. It was not very dynamic. It was pretty old-fashioned and this product was almost seen as a nuisance as opposed to an opportunity, this product that comes out of the refinery. It was very much a case of, here’s a price, take it or leave it, so I saw a big niche.

When you’re very small and you start from zero, you have to find that niche to compete with the big guys and my niche was commercial. We offer very good service because of the fact that we started small and I could control the whole supply chain. The first customer I ever got was P&O cruises and that’s even more of a challenge, because it’s a cruise ship that lands here for six hours, whereas normally in other ports they’ll stop for 18 hours, and everything had to be quick. We were competing with Mobil because P&O had a contract with them in Southampton, which is their home port. We started off just topping up 500 tonnes here and there, so the point was service, making sure that the customer feels like a customer and that we are providing them proactively with information that they don’t normally get.

We provide a service to ships and at the end of the day it’s about time, it’s about reliability, and it’s about providing a service that they need. Price is crucial and you always have to be competitive, but I think that in a competitive market it’s that added value which customers appreciated.

TRC: How would you appraise the company’s growth?

JB: We started with two employees and grew from there. Growth was immediate as we exceeded our volume expectations in that first year of trading. Our supplier, our wholesaler, had a way of benchmarking their own commercial department with us. Luckily, we did pretty well and they diverted more fuel to us. The first year it was 75,000 tonnes, the following year it was 150,000 tonnes, and they also offered us a supply agreement in the Canary Islands and Ceuta, so immediately we expanded there as a physical supplier.

One of the key things in this business is the people, and the team that we have is phenomenal. We expanded to the Canary Islands, to Ceuta and then on to Panama and then, in 2001-2002, I realised that we were working with a lot of intermediaries so we didn’t have that global commercial strength.

We decided that we needed to set up a global network. It doesn’t need to take a long time. So in 2001-2002, I decided to set up a network of offices direct in hub countries so that we could access those markets directly. The first one was Greece. The next six to seven years was very much about that, gradually expanding. After Greece, a couple of years later we went to Singapore, the biggest bunkering port in the world, then Shanghai, Geneva, Dubai, Tokyo, Norway, Amsterdam and Korea to mention a few. Ultimately It’s about customers. In Geneva we gained big customers such as Cargill, Bunge and MSC. Little by little, because it’s very hard to find the right people, we started setting up a team in each of these important locations.

TRC: Is there anywhere you still want to establish a presence?

JB: We have a very comprehensive and quite aggressive business plan for the next three to five years. Let’s go back two years and look at Panama, because we’ve been supplying there, but not as a physical supplier, for ten years. Now we’ve got all the customers, so it’s literally just turning the key and going from a reseller to becoming a supplier ourselves, so we took storage and we’ve now got our own barges, and we bring our own cargoes of fuel.

Here, the volume growth over the last four years has been even more substantial because we set up physical supply locations in Panama, Houston, Algeciras and ARA (Amsterdam, Rotterdam and Antwerp) which is the second-largest bunkering group of ports in the world.

Today, we are at 11 million tonnes or so and growing. Having established that platform, now we’re in a good position to do the same thing in other places like Fujairah, LA Long Beach, New York and Singapore, where we have a lot of volume but not as physical suppliers.

We have about 20 projects in a feasibility study stage where we’ll probably activate two or three a year, so we are always looking to set up new locations. The future is in the places we’re going to develop; Gibraltar is definitely one of them and we have already started. We’ve bought new barges which are here, we’ve taken on additional storage, and we also took over BP’s rented storage in Algeciras.

TRC: How do you cope with oil price fluctuations?

JB: We don’t do any proprietary trading; everything is hedged. We hedge all of our price risk so whether the price goes up or down it doesn’t affect positively or negatively on our results. It’s very tempting for some businesses to deviate from their model to make a quick buck, but there is risk in that. One of the key things for our company is that we’re in no rush. We know that we have a good product and a big potential to grow. There’s still a lot more to develop. We are experts at our own game and we don’t need to go into anything else.

“It’s very tempting for some businesses to deviate from their model to make a quick buck, but there is risk in that. One of the key things for our company is that we’re in no rush”