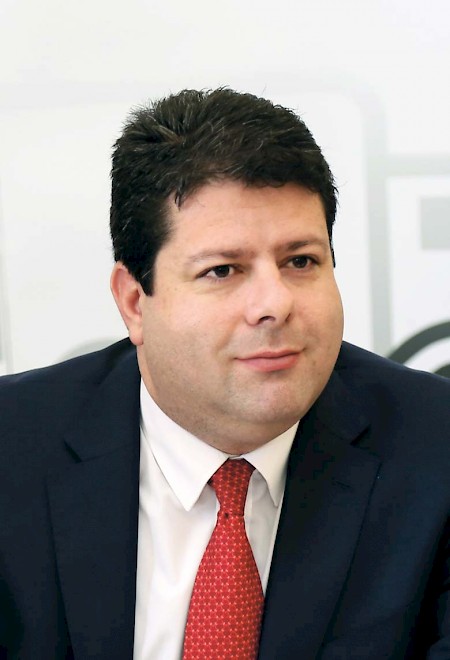 After a career as a successful lawyer, Fabian Picardo seemed destined for the political stage, which the chief minister of Gibraltar has strode as the British territory’s chief defence advocate since 2011.

Gibraltar’s chief minister, Fabian Picardo, grew up in the Upper Town area of Gibraltar in an environment that afforded not only a “fantastic” view but also a vision that one would like to think has guided him both as a successful lawyer and politician in the presence of an exacting neighbour. That area, he says, “always made me think about the huge potential that the bay of Gibraltar could have as long as we were able to work together with our Spanish neighbours.”

Neighbours. A southern European version of the Australian soap opera, and the ins and outs of family matters, or not? Staunchly British, his grandmother was Spanish, and apparently of a Republican bent, and that might help explain why Picardo, and many other Gibraltarians for that matter, particularly the younger ones, feel absolutely no resentment towards their Spanish neighbours. “I feel a huge affection for the people of Spain, in particular the people around Gibraltar in the Campo de Gibraltar. They are not responsible for the actions of their government that sometimes make the lives of the people in this area so difficult.”

“I feel a huge affection for the people of Spain, in particular the people around Gibraltar”

The rest of his background mirrors that of many Gibraltarians, who by dint of war and other geopolitical manoeuvres of a somewhat less mortal intent have forged a unique southern Mediterranean cultural melting pot. “The Picardos came during the Napoleonic Wars to Gibraltar and I’m particularly proud of that part of my bloodline,” he says.

The question raises itself if Picardo’s career as a public servant was forged by the example of his family. His father was a clerical worker for the ministry for defence of the government of Gibraltar, and his mother was a personal assistant to Joshua Hassan at one time, whilst he was chief minister and also the founder of the territory’s leading law firm. Picardo worked there after studying for a law degree in Britain, as the proud beneficiary of the grant system introduced in 1988 by the GSLP government at the time. Picardo has headed the GSLP since 2011, taking over from the veteran Joe Bossano, before subsequently leading them to electoral victory in coalition with the Liberals at the end of the same year.

Picardo is not coy about the fact that he is an ambitious man. He was only 14 years old when he went to Joshua Hassan’s chambers to discuss the possibility of working for him as a lawyer. But at the same time, that view from his room forged a vision for his community and of a political career. “I started to wake up to politics and see what Hassan had done, and I started to understand what Joe Bossano was doing. I realised that if I had the ability to become a lawyer then I should use that ability also in the interests of Gibraltar. Gibraltar is a place where all of us have to pull our weight; we all have to do what we can and I wanted to do what I could in politics.”

Prime Minister Picardo at his offices at 6 Convent Place, Gibraltar, colloquially known in the territory as “Number 6”. Photo: Marcos Moreno

Incidentally, his wife, the mother of their two young children, works for Hassans, showing the extent to which Gibraltar is a tight-knit community that does things in a family way. And family is something that governs Picardo’s way of governing. “My parents instilled in me the simple principle of equality, that nobody is better than anybody else and that we shouldn’t look down and absolutely anyone, because all of us are created equal. I think if you have that clear grounding, then there is only one politics that you can pursue, and that is socialist politics.”

Picardo also has a strong practical streak, one that further explains his decision to become a lawyer and one of the reasons of the transformation of Gibraltar into a small but vibrant economy. “It all came about as a result of a discussion with a teacher, who I was particularly keen to argue with, who told me that if I wanted to argue I should charge people for it and become a lawyer.”

But in the end, it all comes back to family. Picardo longs for a situation in which his sons Sebastian and Oliver can grow up to vote in a political environment in which “normality” reigns to allow them to decide freely about their future.

The Report Company: When you were young, did you ever envisage becoming chief minister?

Fabian Picardo: I realised that if I had the ability to become a lawyer then I should use that ability also in the interests of Gibraltar. Gibraltar is a place where all of us have to pull our weight; we all have to do what we can and I wanted to do what I could in politics.

TRC: You have benefited from the mandatory university scholarship scheme to study at Oxford; what role has this scheme played in shaping your life?

FP: I think we have a hugely positive approach to education, introduced by the socialist party when it was first in government between 1988 and 1996, which allows anybody who is able to obtain a place at university to study a career of their choice. Of course, it changed my life when I was able to embark on my studies at Oxford to become a lawyer. It opened all the doors I needed opened in order to be able to practice law in Gibraltar when I returned. I think all Gibraltar students have opportunities way beyond their means because the government is there to provide the tuition fees and the maintenance grant to enable people who want to go away to study to do so, whatever their family background may be.

TRC: What prompted you to study law and become a barrister?

FP: I only settled on a career in the law after I’d decided that neither the clergy or a career in commercial airlines was for me. It all came about as a result of a discussion with a teacher, who I was particularly keen to argue with, who told me that if I wanted to argue I should charge people for it and become a lawyer. That opened my eyes to the possibilities that arguing presented. As a result, I settled on that career and have enjoyed it thoroughly since, representing people and putting across the points of view of those who might not be able to express themselves to tribunals, or now in the political context putting the case of the people of Gibraltar across to international organisations.

TRC: You’re coming to the end of your mandate; what is your reading of the balance sheet of what your administration set out to do and what has been achieved?

FP: We approached the elections in 2011 as an opportunity to enter into a contract with the people of Gibraltar. They would hire us as their board of directors of Gibraltar Plc to deliver a very clear package of reforms and initiatives, and we have delivered on just about every single one of them. The very few areas where we have not yet reached our objectives are ongoing. But the change that we have brought to Gibraltar institutionally and physically is palpable.

Where Gibraltar might have had two meetings of parliament in some years, under the administration that I lead it has monthly meetings of parliament, giving the opposition the opportunity to ask questions which are topical and allowing members of the public to see exactly what is happening in the heart of their democracy with the new video feed that is available from parliament and can be viewed online.

In terms of the physical changes, there are two new schools, a university, a new bank and a new 700-berth marina. These are the crowning achievements of three and a half years of very hard work, where people have seen that ministers have given their all to deliver the change that we said Gibraltar required.

TRC: If re-elected, what goals would you set yourself?

FP: I think it’s important to now see through the works on the new power plant for Gibraltar to provide electricity security for the nation, and it’s important to consolidate some of the achievements that we’ve made. It’s important to invest still in education and health; those are the two areas which will require further investment, and I think we need to concentrate also on ensuring that we give value for money to our shareholders, the citizens of Gibraltar.

TRC: What would happen to Gibraltar in the event of a British exit from the European Union?

We would still have a port and an airport, and we would still have privileged geographical access to a pivotal maritime point which is the Straits of Gibraltar. Survive, we would, but how our economic model would change is something that the government is working on.

TRC: Are you hopeful that the outcome of the Spanish general elections at the end of the year could lead to a positive shift in relations with Gibraltar?

FP: We will always look for that positive shift, regardless of the political complexion of the party that wins the general election in Spain. That is a matter entirely for the Spanish people. All we look for is reasonableness in our desire to have a dialogue with the Kingdom of Spain in order to ensure that we make the most of the opportunities that Gibraltar can present for itself and the Campo de Gibraltar.

TRC: How do you define your identity?

FP: I am definitely from Gibraltar, but I am a British Gibraltarian.

TRC: What future do you see for your children in Gibraltar and what would you most like to achieve as a politician in shaping that future?

FP: Gibraltar has huge potential and our relationship with Spain has unleashed even greater opportunities. When my sons are of voting age, I would like them to be able to choose leadership for our nation without having to have regard for the Spanish dimension. I think the best thing that I can do is to ensure that the hard work that needs to be done to make some elements of the Spanish political class realise the value that Gibraltar could have, should have been resolved by the time that Sebastian and Oliver are at work, and that normality should reign in the area.